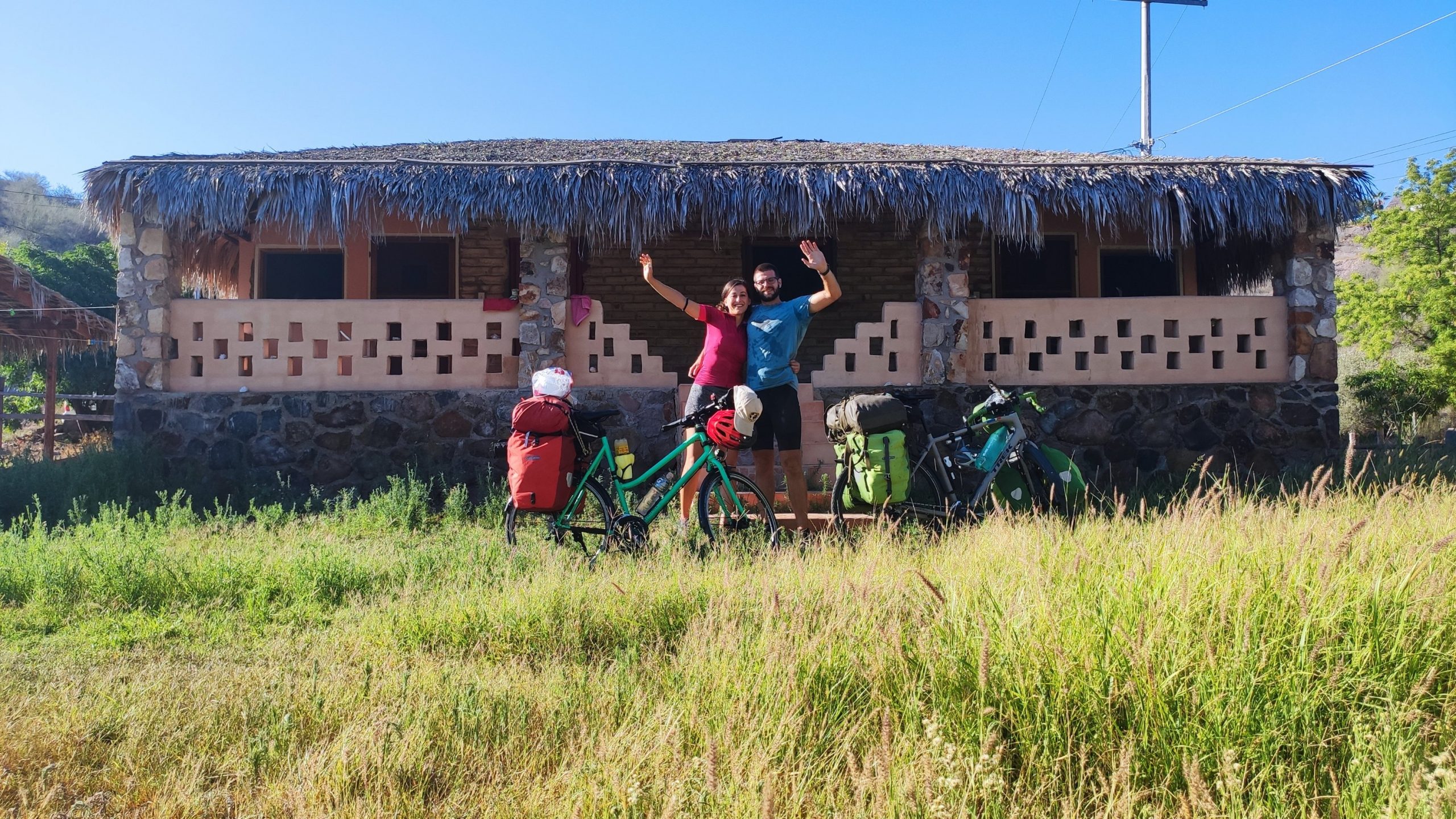 Our house in Mulegé

Biking through the desert

Following the Carretera transpeninsular south of Guerrero Negro, we had to cross the Baja Californian peninsula again from the Pacific side to the sea of Cortez. “The more South you go, the more beautiful it will become.” That was the statement of a traveler couple we met in Puertecitos. They were absolutely right. Biking along such an abandoned road lined with beautiful huge cactuses was an absolute dream. We crossed the towns of Vizcaino and San Ignacio before reaching the sea of Cortez again in Santa Rosalia. Between each town lies a distance of approximately 80 km of nothingness.  So, our plan for every day was to reach the next town, stock up with water and food, bike out of town and camp somewhere in the desert. It was easy to hide, because as soon as you are 100 m away from the road you are invisible between the cactuses. And the sunsets out there are absolutely beautiful.

When we passed an army checkpoint in San Ignacio we realized that they were checking our temperature concerning the Covid-19. Also, in the news we heard that more and more public spaces are closed and countries and governments all around the world are recommending or even forcing people to stay at home. The situation in Baja was not (yet?) that dramatical, but what do you do when you are forced to stay at home while traveling with bikes and a tent through the desert? This question was of course also raising in our heads. In Santa Rosalia we rested for one day and started to check volunteering options in Baja. Santa Rosalia is a mining town with a unique style. Nowhere else you find houses made out of wood in Baja California. However, for us it was clear that this town with its industrial flair is not our preference, so the next day we continued our way 65 km south to Mulegé, the best decision ever!

In Mulegé we felt home from the first moment. It is a beautiful oasis in the middle of the desert where the Santa Rosalia river reaches the sea of Cortez. It is the only river in Baja California Sur, which permanently has water. This makes it possible to grow vegetables and fruits. The first couple of nights we spent at the campground Huerta Don Chano, a beautiful green spot where we could set our tent between banana trees. The vibes at Don Chanos were very positive and easy going with a lot of permanent campers from the US spending there the winter and two other traveler couples who also decided to make a Covid break.

We quickly found out that Mulegé has a nice communal life between the local Mexicans and the many, mostly retired, US residents. An example is that the local grocery stores didn’t sell that much products due to less tourists and restricted supplies due to the pandemic. As a result, there were different fundraising actions supporting the locals initiated by the US community.

We decided to give it a chance and ask around in the village and on social media if there are some options to volunteer. Via detours we learnt to know Deny. He had a couple of projects around his property next to the river and an empty house where we could live in. Immediately we felt great sympathy for this open-hearted man with the Yin and Yang sign on his house. He probably felt the same for us because a few days later we moved to him.

To be around Deny’s property was like being on a big playground. Every tool needed was available and options to create something seemed endless. The first thing I did was repairing and reorganizing Deny’s storage, while Anna took care about the establishment and design of our new home. Watering the plants around the house quickly became part of our daily routine.

The biggest project, which he had was the construction of a hostel/community center. Four local workers helped him with painting,
plumbing and carpenter work. We tried not to “steal” the job of the workers and came up with some other projects to improve Deny’s place.

Further, we built a compost, we were planting and replanting trees, insulating the roof of our house, collecting trash around the yard and
along the street and taking care about the garden. I am also especially proud of Anna’s mandala, but best check it out yourself.

If you think now that we worked like crazy from the morning till the evening, we have to correct you. We were the masters of our time and didn’t neglect to explore the surroundings of Mulegé and to get in touch with the locals. One of those locals is Frank, who lived just opposite of the river by the highway. His father Francisco is the owner of a supermarket and liquor store and Frank helped him out during that time. He has a passion for cooking and from him we learned how to cook Pulpo (Octopus) or how to prepare “Ceviche” (raw small cut fish, mixed with vegetables). We don’t know who is crazier, Frank who likes to jump from high cliffs to the sea, or his Dog “Dogginko”, who could jump from the dam and swim with me for hours.

Another magic moment was, when we followed the river upstream and explored a canyon with Deny, Beth and some friends. Last but no least, south and north of Mulegé there are beautiful beaches, but about them we will tell you in a separate post (coming soon).

During the almost 3 months we stayed in Mulegé it became more and more our home. The longer we stayed, the more people we got to know. It felt like one big family. Of course, we were also excited to be able to finally continue our biking adventure. But the day we left Mulegé we had tears in our eyes. We hope to return one day. THANK YOU MULEGE!

Transfer with bikes from Switzerland to LA