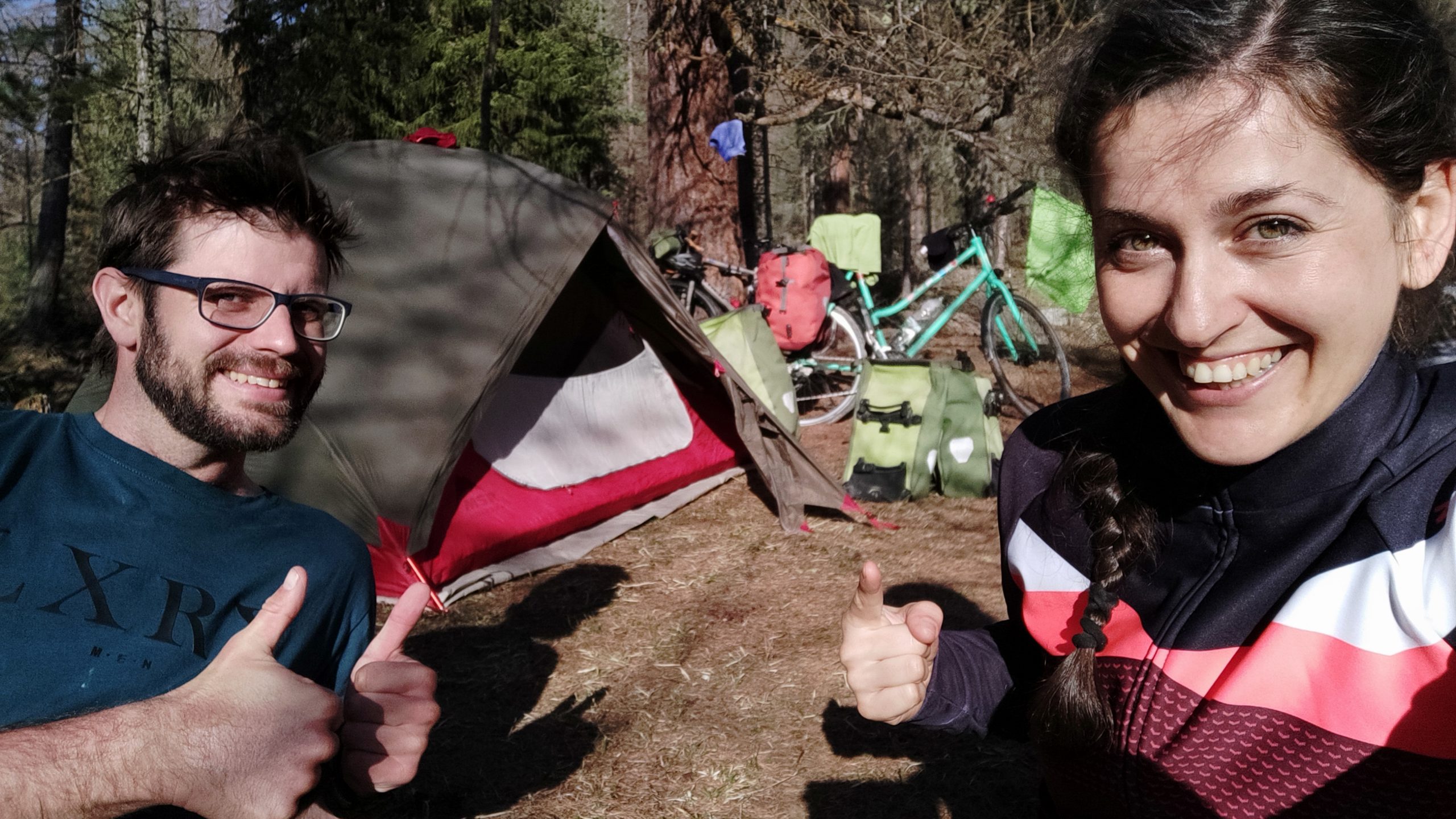 Explore Europe bit more ecological and much cheaper! Travel by bike! It is really easy and so worth it! As an inspiration we are offering you here our 5 days bike touring trip in Switzerland and Italy. So, let`s get inspired. 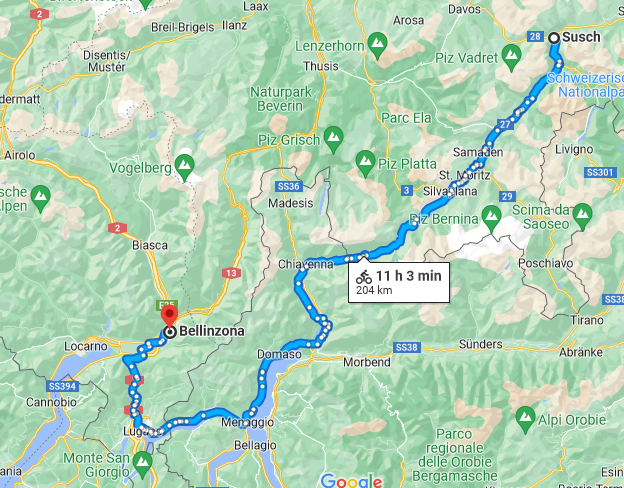 Would you like to do a bike touring trip, but you never did it before? Are you fascinated by reading stories from long distance biketourers, which crossed whole continents, but you do not feel brave enough to start with such a long trip? So, just start with little steps.

With bike touring it is like with everything in life. Let’s start small and by time you will feel empowered to go bigger. Often you don’t need to go far to discover something new. Everywhere you can find cool adventure. This spring we had a couple of days off. After being back home from our Latin America trip for almost a year, we felt like we need some bike touring again. Time to step out and explore! In one free week you can do much more than you think – for example 5 days bike touring round trip in the South of Switzerland and beautiful Northern Italy.

Bike transport by train in Switzerland is easy

Switzerland has a great railway system and it is easy to transport bike in the train. This gives you the opportunity to reach places kind of fast and start or end your bike trip not only in front of your house. We decided to take a train to the Engadin valley in South Eastern Switzerland. The train tickets you can buy here. And don’t forget to check if you your train requires a bike reservation. Swiss people like to bike, so plan your trip in advance and book it as soon as possible. Otherwise there might be no more bike-space.

Traveling by bike from Susch up the Engadin Valley

So, we packed all our gear, hopped on a train and after 3 hours we were in a completely different landscape. The adventure could begin. Well, not directly, first I had to fix a broken spoke, which I got on the 200 meters from our house to the train station.

From Susch we rode our bicycles up the Engadin valley. The first day we made it until Celerina. We tried the official bike path (No. 65, Inn-Radweg). It follows the shady side of the valley, so there was still a lot of snow. Consider that on this way not every bike can pass around Easter. With casual road bike is better to try in may – june. It was mid April and the temperatures still drop around the freezing point at this time of the year in this region. But we were prepared for this and had a cozy night in our MSR Hubba Hubba NX tent.

Biking over the Malojapass into Val Bregaglia

The second day we crossed St Moritz, followed the lake Silvaplana and lake Sils until we reached the Malojapass. From the side of the Engadin valley, it actually doesn’t feel like you are climbing a pass, since you reach it on a nearly straight road. However, the drop to go down into the beautiful Val Bregaglia is very impressive. In general biking over the Malojapass and into Val Gregaglia is just such a joy.

Instead of straightly crossing Val Bregaglia, we decided to climb up to the beautiful village of Soglio. It is a very romantic place with old stone houses and narrow little alleys. It is steep up in the Northern flank of the valley. On the road up to the village you find a lot of chestnut trees and old abandoned stone houses, which are built on grass terraces. On one of those terraces, we found the perfect place to hide our tent! Just be careful where you lay it because of the spiky chestnuts. In Soglio they also have a super nice restaurant with high class cuisine so if you are a gourmand like us – do not forget to check it out!

And the cherry on the tart – did you ever bike behind the waterfall? Check the video below – full screen 🙂

The next day we dropped back down into the valley and crossed the border to Italy on a pedestrian bridge in Castasegna. After a few km’s, we found a “Ciclabile” – a bicycle path separated from the road. It took us straight into the heart of Chiavenna, where we enjoyed a freshly made Cappuchino on the Piazza. With a lot of tail wind, we continued traveling down the valley towards Lago di Mezzola and further to Lago di Como.

The landscape around Lago di Como is very dramatic and beautiful and attracts a lot of tourists. Therefore, all the region and the campgrounds were pretty much crowded. It is also a wind-surfing paradise. The advantage with two bicycles and one tent is, that you will always find a place to squeeze in. And we squeezed us on a campground in Menaggio. It wasn’t the most beautiful spot, but we were happy to have found our place for the night and we enjoyed to observe the climbers at the rock wall nearby.

The fourth day we decided to leave the crowded Lago di Como and take the road up to Porlezza and further to Lago di Lugano. Near Piano Porlezza we found a beautiful little lake with a absolutely stunning official campground. We were a bit sad that we didn’t make it until here the day before. We followed the road through the valley until we reached Lago di Lugano. On that part we struggled with some headwinds. Following the lake, we reached the border between Italy and Switzerland. The crossing was no problem.

The last night of our trip we camped again wild on a little hill near Camignolo. The hospitality we also experienced here was incredible, even though the language barrier. When we asked a local old man for a place to camp, he took us up the hill with his car. Half an hour later he came back with sixpack of water, because I asked him if there is anywhere a water source.

The next day we rode our bicycles until Bellinzona, from where we took the train north through the old Gotthard tunnel and back home to Grenchen. In our five days bike touring trip in Switzerland and Italy we did around 230 kilometers. It was 1300 meters ascent and around 2500 meters descent. We spent 4 nights in the tent, one on a official campground and three wild. It was a refreshing trip for our legs and minds. 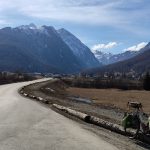 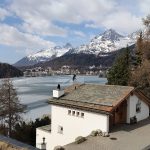 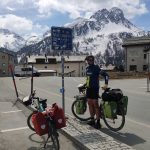 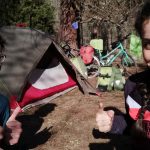 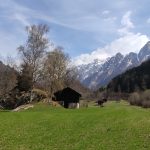 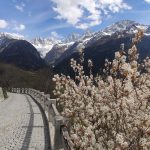 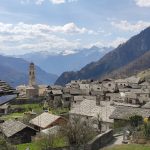 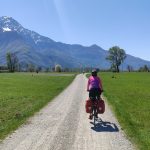 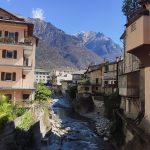 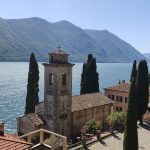 How to transport bikes from Europe to USA