We are always ready to volunteer

There is no better way to rise and shine than to try volunteering at least once in your life. You can study or travel. You can be a family of five or a single retired person – your volunteering options are limitless. If you are struggling with a problematic child without a purpose – here is your solution. So give it a chance and do it! It will give you sooooo much, we promise. You want to try it, but don`t know how? Here are some of our favorite volunteering options all around the world.

Did you already hear about workaway.info? No? So we have to change it quickly. For us this is not only a well organized, fully functional and safe website, but it is a family. Workaway is a platform, which is connecting incredible people all around the world with one wish – to help somebody. You can do it while traveling to lower your expenses or learn to know the place better. Or you can do it, because you need a change in your life.

It is simple. When you need a help with basically anything – gardening, singing, hotel management, house building – you sign in as a host, write your conditions and needs and pay a little annual fee. But, you also have to be capable to give at least free accommodation and food to your helpers. And after your registration you just wait for your first volunteers.

If you are a traveler or a person with a lot of free time and you want to help somebody, you go on this website and sign as a volunteer. You make your profile and pay a little annual fee and that`s it. Then you can search for a host or place where you would like to help. All around the world. And some volunteering jobs are also paid. Easy peasy.

We love workawaying and we did it many times. It was always an incredible experience. For example, on our bike bike touring trip in Latin America we also spent a few weeks volunteering in Guatemala. You can read about it here.

Hello, is there anybody who needs a help?

Our second favorite volunteering option is actually that original one which was here looooong time before internet. You just go or bike somewhere where you would like to stay longer, you check the place and you just simple ask somebody: ,,Hello, is there anybody around who needs a help?” You will be surprised how many options you can find like this.

During the pandemic it was a bit harder with workaway – people were scared, but we just asked around and we found absolutely amazing places to volunteer. If you are a bit more shy, you can always make some posters and just hang them around and your host will find you.

Wwoofing for your greener life

Wwoof – or World Wide Opportunities On Organic Farms – is another super truper way how to make you more satisfied with yourself. You can be a young and curious biketourer, a retired or bored grandpa or a family of 10 searching for a better life, on wwoof.net you will definitely find a place where you could spend some time by doing some incredible green stuff 🙂 It is all about the organic farms, sustainability and healthy life style. So you can work with lovely animals, you can plant some cool plants and you can definitely learn for free how to do permaculture or to be eco, bio, compostable..

We also know a lot of families which do wwoofing instead of normal family holidays. So they can spend their holidays where they want, plus they can experience it from a completely different perspective and learn something new. Isn`t that cool?

P.S. If you didn`t manage to get a working visa in New Zealand – et voilà! – Here is your chance.

Why to sit at home if you can do house-sitting?

Another working for free – living for free option which is especially useful while traveling. So what do you think about switching watching TV in your living room for watching whales from some lovely beach-front terrace in Tasmania? And it is not even complicated.

You just need to choose one of the house-sitting websites (for example trustedhousesitters), sign in, make your profile and search for a sitting options. And one more important thing – it is not a free holiday! – you have to be responsible and really care about your tasks! Your irresponsibility will end your housesitting career, because it is again all hanging on good feedbacks! So keep doing well and you can easily live your dream in Sydney or wherever you would love to be.

Are you not getting why some people want strangers to take care about their house? The answer is simple – it is cheaper to have a housesitter than a paid security in a expensive private villa on the beach. Or in the maisonette with direct view on Eiffel Tower.. Somebody has to take care about the plants or – and this is very common – about the pets. So don`t be surprised if you will have to deal with luxury living or ultra cute animals.

Volunteering but not for free? Yes, but only for experts!

And here we are – say hello to experteering! But only if you are a professional. Because this option requires more than just your will to help. It is made for those, who are actually really good in what they do, but they need a change. So if you love programming but you are not happy in your little office in Bulgaria, with a bit of patience, you can find a cool temporary position in some chinese NGO with pandas which deeply need professional help but can not pay millions.

One of my favorite websites for experteering is movingwords. It is very simple and professional and if you subscribe, you can get cool offers directly on your email. So if you are good in your job but you need to chance a place or feel more useful – this is really worth it!

Do it yourself a.k.a. fundraising and crowdfunding

If you didn`t find a match between our previously mentioned options, this might the right solution for you. Anyway, not everybody is a social human being or has time to stay longer on one place. If this is your case, then let’s raise some funds and crowds!

Again it is super simple – for fundraising you organize some event – for example The Planet Earth Football Championship of Biketourers. You post it online on social media. Or you can also use some fundraising page of your choice, for example gofundme or fundly. Then you just let people to donate. So you entertain people and they will give you donations which you can use for buying the bicycles for all indigenous village somewhere in Papua.

Be creative! Volunteering should be fun!

The same way you can use also with crowdfunding – but in this case, you can do it while moving. For example you can do a bike-touring challenge through Himalayas to raise the money for building schools for local children. Crowdfunding is usually longer lasting and you can collect money till you reach your goal or even longer. You can use the same websites like for fundraising. And there is many of them, even national ones, so check it out first – some might take too big percentage from the donations.

We also did crowdfunding once while bike touring in Spain. Originally, we wanted to do it more often, but it is not so easy to be online in between the monkeys somewhere in the Guatemalian jungle 🙂 Also, instead of official fundraising and crowdfunding websites, we simple asked people on our social media to donate directly to the charity we wanted to support. And we did it for Rainforesttrust, because they do an incredible job. So if you have a bit more time, check it out and at the bottom of their page you will find a donation button 🙂 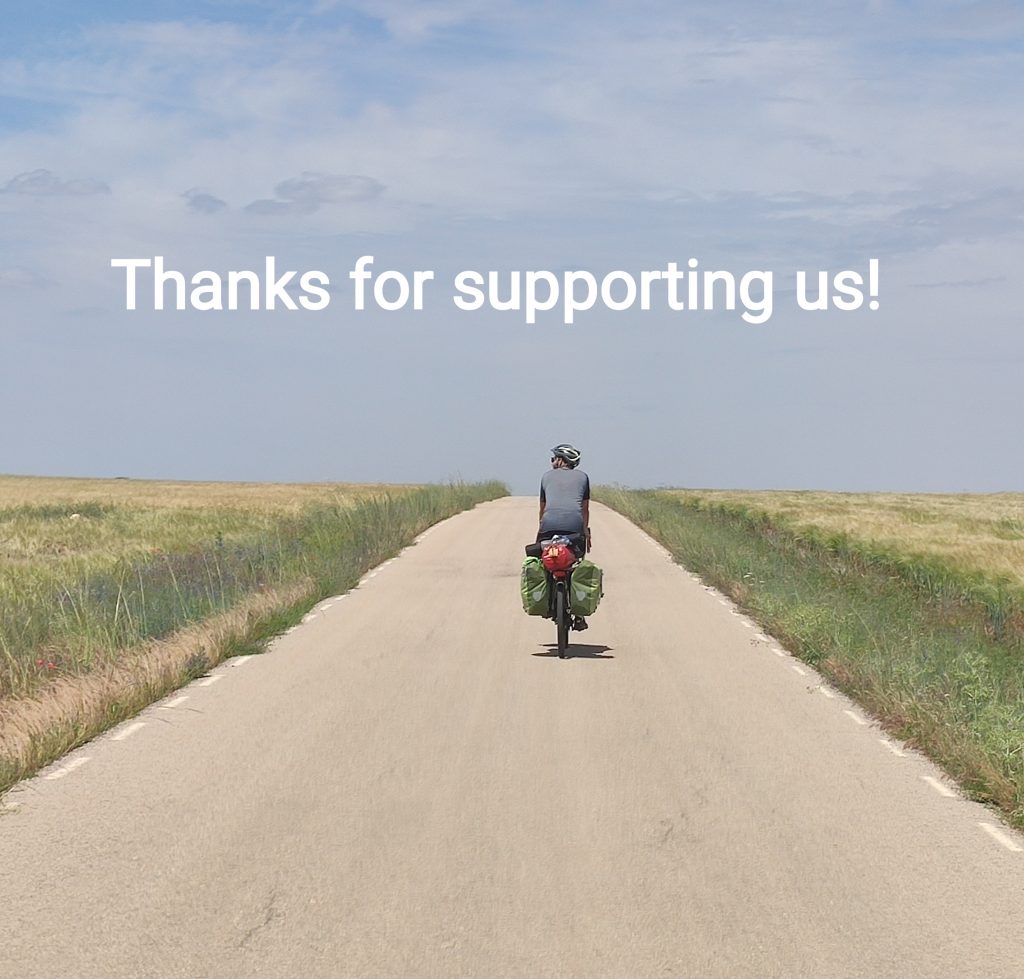 And you know what? You can volunteer also when you come home. For example this spring we organized 2 public presentations about our bike touring trip in Latin America and all the collected money went again to our favorite NGO. So be creative. Do it yourself and enjoy it!

If I still didn`t persuade you enough, maybe you should check for an inspiration these posts about our volunteering experience during our epic pandemic bike touring trip through Latin America. Check it out here! Or here!

15 bike touring and camping essentials for a woman